I decided to finally finish up my analgyph stereoscopy sample, and cut the depth-of-field component that was adding too much complexity for my limited spare time right now. 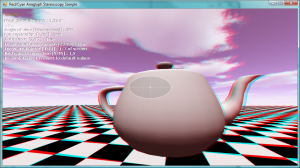 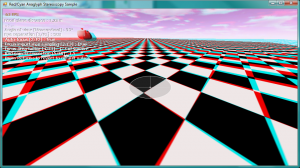 This sample demonstrates a couple of things :

The distance between the eyes is also tweakable, if you want to give yourself a headache.

I wanted to do a stereoscopy sample to show how I did it in Super HYPERCUBE, but I can’t/don’t want to release its source, so I just re-did it properly. Auto-focus is a bonus feature that I wanted to play with; sHC didn’t need that since the focal plane was always the backing wall.

This sample, like all my recent ones, uses the latest version of my components framework. There are some differences between this release and the Stencil Rendering one, but it’s mostly the same. The biggest thing is that base components (Keyboard, Sound, etc.) are not auto-loaded anymore, and must be added in the Core.Initialize() implementation. This way, if I don’t need the sound engine, I just don’t load it… makes more sense.