The input values of thumbsticks on an Xbox 360 controller are always contained inside the unit circle, a disk centered on the origin and whose radius is 1. This is usually fine, because you want to interpret the values as a vector inside that circle… but if you want to provide an analog version of a D-Pad, for instance to control a character in a 2D platformer, then you’ll find that your character will never reach maximum horizontal speed unless you hit the (1, 0) or (-1, 0) vectors, exactly right or left. Anything tilted up or down will give a fractional speed, and if you hit a diagonal corner, you’ll end up with ±√½.

So what if the analog stick was a square area instead, such that the entire circumference has a least one component maxed out, like the contour of a square?
It may seem like a simple thing to do, but it proved to be a lot of trouble, (nope, it worked out in the end!)… but here’s how I researched the problem.

I first googled “Mapping circle to square“, and ended up on a blog entry that describes the inverse transform. Fine, I’ll just invert it, isolate the x and y variables as a function of x’ and y’… But that proved to be a problem.

Wolfram|Alpha doesn’t know what to do with it, and after making it more manageable (for x, for y), it gives 4 different answers that seem to work only for specific intervals, but doesn’t say which…
I tried doing it by hand and was stuck early on, because I suck at this.

And since I don’t have access to (nor know how to use) proper nonlinear equation solvers, I decided to give up.

By googling some more and varying search terms, I stumbled upon a cool flicker image titled “Conformal Transformation: from Circle to Square“. That’s exactly what I need!
But alas, it involves something called elliptic integrals and this also goes beyond my math understanding, or the amount of effort I was willing to put in this. The description also links to the Peirce quincuncial projection, which maps a sphere to a square, but the math also goes above my head (complex numbers arithmetic and again, elliptic integrals).

At this point I realized that what I was trying to do was not trivial.

So I just went back what I usually do : analyze the problem, determine what I expect as a basic solution, and work my way there.

The scale for angles close to diagonals should fall down to identity (1) when it reaches a cardinal direction, though I’m not sure about the interpolation curve… Linear should do fine?

And for additional fun and testing, here’s how evenly-spaced random points inside the unit disk stretch to the unit square using this function (points generated by my Uniform Poisson-Disk code) : 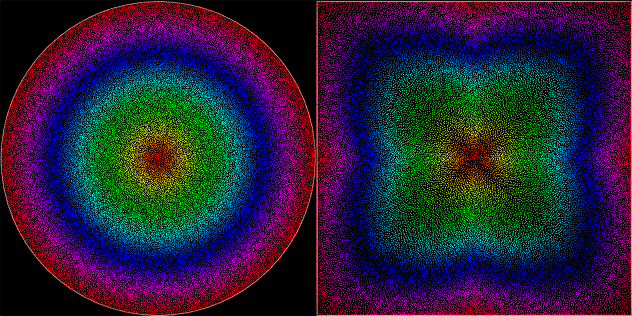 Not bad? Good enough for me.

I then tried different interpolation/easing methods for the scaling factor, and tried raigan’s idea of just scaling and clamping linearly the circle to a square, here’s what it looks like! 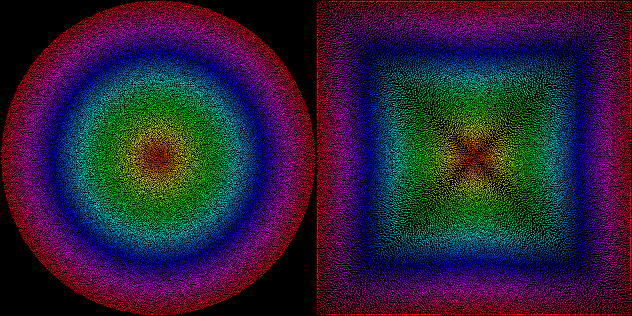 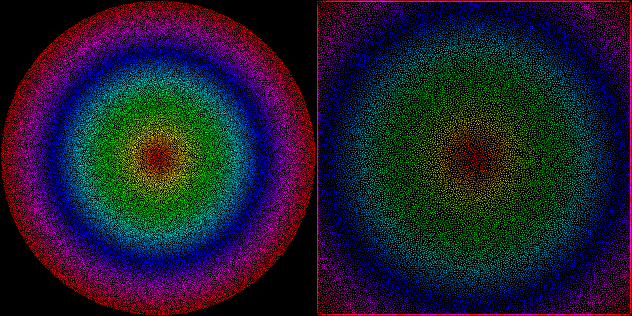 I tried sine, quadratic and circular ease in/out/in-out from my easing functions library, and quadratic ease-in was the most balanced. It almost shapes everything to a square, very little clamping is necessary, so I’ll keep that in.

The inscribed square method is nice and simple, but cuts off a lot of values and keeps circular gradients in its area. But in the real world, for 2D platformer input, it’s probably just fine…

So, I decided to give another shot at this after speaking on the bus with a friend about polar coordinates and trigonometry. Turns out there is a more exact solution, and by adding a “inner roundness” parameter you can also tweak how much of the center input will remain circular, while still touching the sides for circumference values.

Here is my final C# function, then I’ll explain how it works :

There are two concepts here :

I think I’m done with this now! Yay.

16 thoughts on “Squaring The Thumbsticks”