You know, I was so confident when writing the first post that I was addressing a common problem (which is not entirely untrue considering Google hits) and that it would be a pretty straightforward “here’s the issue, here’s the fix, enjoy” scenario.

Boy, was I wrong.

The common approach when trying to fix a bug is to first reproduce the problem. While I had no difficulty making a fictitious test case that does reproduce the “unreachable hashed entry” issue, I’m having all the trouble in the world finding a proper, real-world, justifiable algorithm that needs a hash table with mutable keys.
It just never seems to me like a reasonable thing to do.

Nevertheless, being the stubborn bastard that I am, I’ll present here a recipe to encounter the problem with as much justifications as I could make up. And if ever you’re ever stuck in a situation where you do need a hash set to react properly with mutable entries, well you’ll have a solution of sorts.

Take a deep breath (this is a looooong one) and hit the jump.

Note : For now, I’ve limited the scope of the problem to hash sets and not maps. 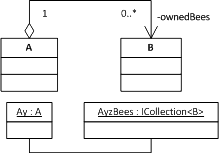 Very simple for now. And a very common situation, just any two classes with an aggregating association would qualify.

I’ll want to end up with AyzBees being a set. But why would one choose to make any collection a set? Here’s a list of all the possible motivations I could think of :

So that covers sets, but why a hash set in particular? Possible motivations…

Typically, all operations mentioned in the first point are executed in constant time in a hash set, so very fast and non-depending on the number of items in the set.

So we’re set (ha, ha.), we’ve chosen a hash set for all or some of the above reasons. This imposes us the following constraints :

This may sound redundant, but instead of just motivating our choice of collection type, those are restrictions we can’t do anything about, they’re inherent to the usage of a hash set. So we’d better double-check it works with our case.
Additionally, in C#, B must override object::GetHashCode() and object::Equals(object) to be identified inside hash sets by its attributes.

The simplest situation is a set of wholly immutable elements. This way we’re sure that the identifying attributes of any won’t change, because the whole objects cannot change. But why wouldn’t we want that?

B cannot be a value-type (i.e. struct) nor an immutable class (doesn’t exist as-is in C# but can be enforced) if it has at least one attribute which :

This is where I’m having lots of trouble justifying the eventuality. But here goes… possible motivations for having mutable/writable identifiers :

That’s all I could come up with.
And I have yet to find an algorithm which requires any of those, and where the requirement isn’t mere laziness.

To sum it up, here’s what the final situation looks like as an UML class diagram : 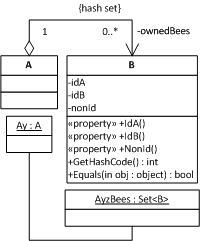 The UML notation omits a lot of information mentioned above, so it isn’t really complete, but it’s better than nothing.
By using my invented «property» stereotype, I assume read-write properties (both getter and setter), so that enforces writability. Also I don’t use .NET 3.5’s HashSet<T> because I haven’t worked with C#3.0 yet, so I refer to the PowerCollections’ Set<T> class which I know uses hashing.

The problematic series of operation is the following : 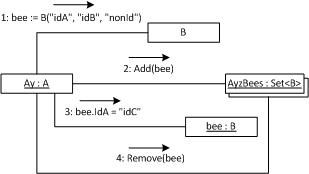 Since we’re always operating on the same object, logically, the third operation should work.

But when adding an object to a hash set, its hash code is used as a key to find which slot it’ll be stored in. And whenever you try to access that same object, it’ll try to find it using the supplied object’s hash code, and then testing equality of all consequent slots until found.
Even if we supply the same object in terms of memory, the hash code has changed along with the identifying attributes, and so the set acts as if it’s a foreign object.

Furthermore, the object will appear when enumerating the set’s contents, so it’s definitely inconsistent behaviour.

My first solution to fix this is to ask the host set to re-hash a freshly mutated Bee from inside its setters : 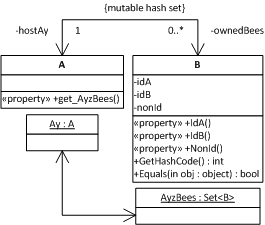 This works fine, but has its share of limitations/problems :

So as you can imagine, this isn’t the solution I propose. But it’s based on that.

And since this post is getting ridiculously long, I’ll keep the solution for a third part, and I’ll join a C#2.0 test case along with it!