FEZ shipped with volume textures (aka 3D textures) for all the sprite animations in the game. Gomez, NPCs and other animated pixel art were all done using those. This was a tech call that I made way back in 2008 and kept with it because it makes more sense than you might think :

But while I haven’t done real testing, one can assume that they’re slower than a regular 2D sprite sheet, and they imply that you have one texture by animation, which restricts how much you can pack things together. Creating a volume texture at load-time with XNA Texture2D.SetData() calls means one call per animation frame, which is noticeably slow. Also, volume textures are not currently supported by MonoGame, and I assume some integrated graphics hardware would have trouble dealing with them.

So the more traditional alternative is using a sprite sheet, which is easy to make using tools like the Sprite Sheet Packer. 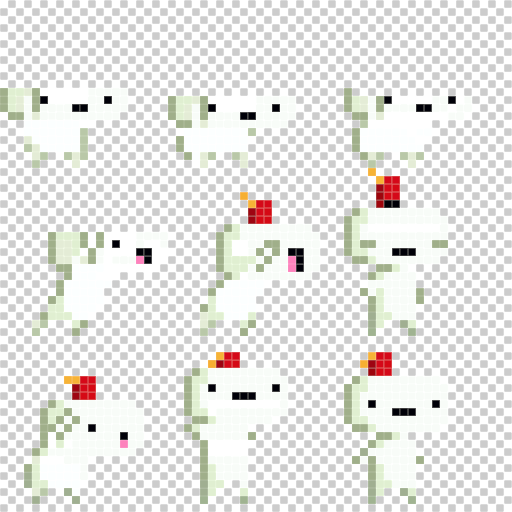 But then what if you need to use wrap texture addressing on it, to have horizontally and/or vertically repeating textures?

If you only repeat on one axis, have relatively small textures and a small number of frames, you can force the texture packer to layout the sprites on a single row or column, which allows wrapping on the other axis.

This worked for some animations, but some were just too big or had too many frames to fit it in under 4096 pixels. In that case, there’s one final option : pixel shaders to the rescue!

When addressing the texture in your shader, you’re likely to use a 3×3 texture matrix, or a 4D vector if you’re short on input parameters. Either way, you have four components : UV offset and UV scale. You can use those to manually wrap the texture coordinates on a per-pixel basis. In the sample below, I extract the data from a texture matrix.

The frac() HLSL intrinsic retains the decimal part of its input, which gives the normalized portion of the texture that the coordinates are supposed to show. Then I remap that to the sprite’s area in the atlas, and sample using those.

I ended up only needing wrapping on one axis for that big texture/animation, but this code does both just in case. This is WAY simpler than customizing the vertex texture coordinates to allow wrapping.
One caveat though, this won’t play well with linear filtering. Since FEZ is pixel art, I could get away with point sampling and had no artifacts there.

P.S. A simple fix to enable usage of linear filtering : pad the sprites with 1 pixel column and rows of the opposite side of the texture! (and don’t include those in the sampled area; it only gets sampled by the interpolator)