The σ symbol is a non-capitalized greek “sigma”, which is often used in statistics to mean “standard deviation“. That’s exactly what it means here; the standard deviation of the Gaussian distribution, so how much the function is spread. The standard value is 1, but putting a greater value will spread the blurring effect on more pixels.

The result of this function is the weight of the tap at x or (x, y), or how much the pixel’s contribution will affect the resulting pixel, after blurring.

So what kind of values does that give? Here are some, having σ = 1 :

The interpretation for those values is the following :

So, the weights at each offset are multiplied with the colour of the pixel at this offset, and all these contributions are summed to get the blurred pixel’s colour.

Though this is not everything. While testing an implementation in the Bloom shader, I found out two problems :

So, back to the drawing board. Or rather the Excel grid.
For the following paragraphs I’ll assume the usage of the 1D gaussian distribution, which is the one we’ll want to use in the end anyway. (see next section)

The luminance issue can be adressed first. Let’s say you have an entirely white single-channel sampling texture, so all pixels have the value 1. So after the first (horizontal) gaussian pass, the value of every pixel is the sum of weighted sum of all the gaussian samples (taps). For a 5×5 kernel with a standard deviation of 1 :

That might look right, but it’s not. To keep the same luminance, the result would have to be exactly 1. And it does not look prettier after a second pass, which is sampled on the result of the first :

What that means is that the tap weights need to be augmented with a certain factor to obtain a resulting ΣHVBlur of 1. The answer is very simple, that factor is what’s missing to get 1 : ΣHBlur^-1.

If we multiply the tap weights by this augmentation factor and sample both passes, ΣHVBlur will be exactly of 1. It works!

The standard deviation issue has a solution as well, but it’s a bit more “home-made” and less formal.
I started with the assumption that a 5×5 blur kernel must have a standard deviation of 1, since that’s what I saw everywhere on the intertubes. Knowing this, the last (farthest) tap weight of a 5×5 kernel is the smallest that any weight in any other kernel size should be; the matter is only to tweak the standard deviation to get a final tap weight as close to this one as possible.

Those are the closest matches I found using trial and error. Since all of those weights are augmented, their sum is 1 anyway, so finding the best standard deviation is just a matter of extracting as much blurriness out of an amount of taps without producing banding.

But why are there are two functions anyway, one 2D and one 1D? Thing is, we have two choices :

One could ask… why not use the 2D version all the time then? Blurring twice sounds like trouble for nothing, doesn’t it?

Intuitively, I thought this was because of restrictions imposed by earlier shader models.
After more research, I found out that there was a much better reason for separating the operation in two passes.

If n is the linear size of the blurring kernel (or the number of horizontal/vertical taps), and p the pixel count in the image, then :

For the record, separating a 2D kernel in two 1D linear vectors is possible because the gaussian blur is a separatable convolution operation. For more info…
So I’m happy that I started coding the multi-pass, 1D-using version first… because I’m just never going to make that single-pass 2D version. It’ll be way too slow… I’ll leave the 2D formula and everything, just don’t use them. :P

I found the most efficient way to implement 1D gaussian blur in HLSL is the following :

This may have sounded confusing; reading the HLSL Code of the following sample helps understanding.

Here it is! A VB.Net 2005 project showcasing an optimized gaussian blur shader, with a downsampling shader. It’s not for beginners, because there is strictly no comment, just well-written code. :)

Note : The demo does not yet reflect the updated formulas. It will come shortly. 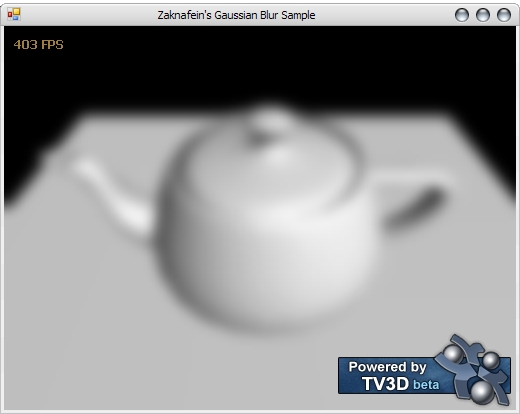 As an alternative to the demo (which contains a GaussianDistribution class that does everything that the Excel file does), I have made a nice reference sheet on the 1D and 2D gaussian distribution functions, well I happen to have made one in Excel and a PDF version for those without MS Office. The Excel version is dynamic, so changing the σ will update all the functions.