Volkenessen is a game I made with Aliceffekt as Les Collégiennes on January 27-29 2012 as part of the 48h Global Game Jam. We actually slept and took the time to eat away from our computer, so based on my estimate we spent at most 30 hours making it! 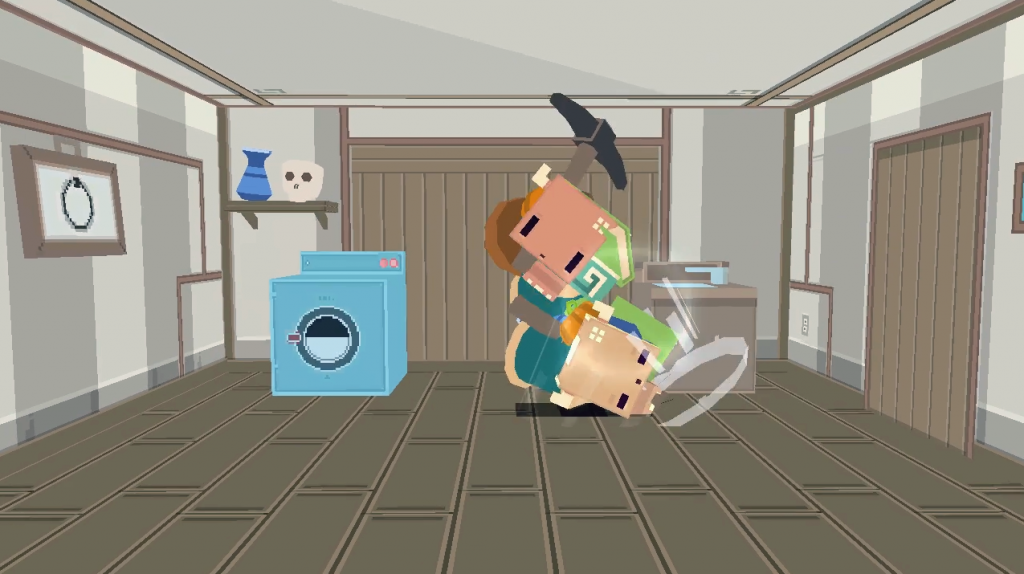 It’s a two-player, physics-based 2D fighting game. Each player starts with 9 random attached items on his back, and the goal is to strip the other player of his items by beating the crap out of him. When items are removed, they clutter up the playing area, making it even more cahotic and hilarious. The washing machine and sink in the background can also fall and bounce around!

You need two gamepads (so far the Xbox wired, wireless and a Logitech generic gamepad have been tested and work [you can use the Tattiebogle driver to hook up an Xbox controller to a mac]) to play, there are no keyboard control fallback (yet). The controls are pretty exotic. To move around you can press either the D-Pad (or left analog stick) or the face buttons (A/B/X/Y), and the direction of the button does the same input as if you pressed that D-Pad direction. As you move, your player will throw a punch, kick or flail his ears to make you move as a result.

To hit the other player, you need to get close to him by hitting away from him, then hit him by moving away from him. Ramming into the opponent just doesn’t do it, you need to throw punches, and depending on the impact velocity, even that might not be enough. You can throw double-punches to make sure you land a solid hit and take off an item.

It was made in Unity, with me on C# script and Aliceffekt on every asset including music and sound effects. I see it as one of our most successful jam games; it even won the judge award at our local GGJ space, and it was just so much fun to make, test and play.

I was surprised how well the rigid body physics worked out in the game. I had to use continuous physics on the players and tweak the gravity/mass to get the quick & reactive feel we wanted, but the game was basically playable 6 hours in! After that it was all tweaking the controls, adding visual feedback, determining the endgame condition and coerce the GGJ theme around the game.

I’ll be porting the game to the Arcade Royale in the coming days/weeks, and it should be a blast to play on a real arcade machine :)